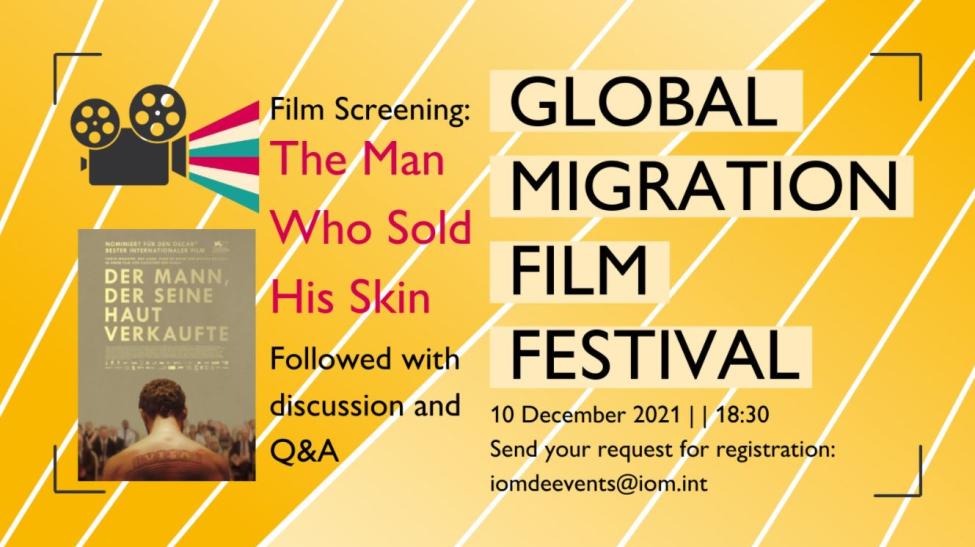 As the International Organization for Migration (IOM) celebrates its 70th anniversary in December 2021, IOM Germany and GMDAC invite you to commemorate this milestone and to celebrate the Global Migration Film Festival (GMFF).

The digital celebration will take place on 10 December 2021 at 3pm, starting with opening remarks and a discussion by IOM Germany's Chief of Mission Jean-Philippe Chauzy and GMDAC’s Marzia Rango on the role of data in the future of migration.

The screening of the Academy-nominated film "The Man Who Sold His Skin" will take place at 6:30 pm, followed by a panel discussion on the role of art in mental health and migration with IOM’s Amanda Nero, Communications Officer at RO West and Central Africa; Mohammad Dalla from Hiwarat e.V. and the Syrian artist Diala Brisly.

Movie Plot "The Man Who Sold His Skin"

Sam Ali (Yahya Mahayni) is a young Syrian man who leaves his country to escape the war. But to travel to Europe and to live with the love of his life, he agrees to get his back tattooed by one of the most provocative contemporary artists in the world. The motive: a Schengen visa. Sam thus transforms his own body into a prestigious work of art. However, he realizes soon that his decision will bring anything but freedom with it.

"The Man Who Sold His Skin" is a moving story about escape, love, hope and crossing social and national borders - provocative, thoughtful, special! Multiple award-winning cinema (incl. OSCAR® nomination for Best Foreign Language Film 2021) with leading actor Yahya Mahayni and renowned actor Monica Bellucci by the highly acclaimed director Kaouther Ben Hania. We would like to thank to “eksystent Filmverleih” and “Jetzt & Morgen GbR” for allowing us to screen the movie during the Global Migration Film Festival.

"The Man Who Sold His Skin" will be released in German cinemas on 24 February 2022 and will be exclusively available online on 10 March 2022 here: www.dermannderseinehautverkaufte-film.de.

Disclaimer: The films screened during the Global Migration Film Festival are the works of independent filmmakers. The films may contain views, advice, representations, opinions and statements of the author of the works and various other information and content providers. They do not purport to reflect or represent the policy, position, views, advice, representations, opinions or statements of the International Organization for Migration or its members and screening of the film should not be considered as an endorsement by IOM of such.