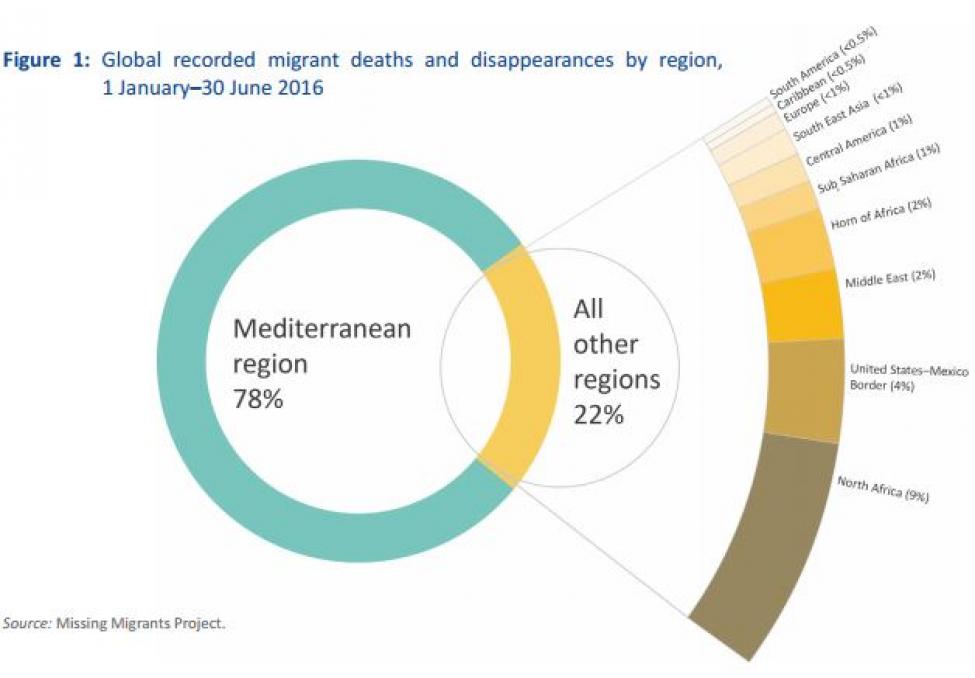 Correction and clarification:
Please note that the Data Briefing “Global Migration Data Analysis Centre: Data Briefing Series, Issue No. 4, August 2016” has been updated with corrections.  The below changes reflect updated estimates from the Missing Migrants Project, which tracks global deaths and disappearances worldwide.  Though the numbers have changed, the data briefing continues to confirm a significant increase in the risk of death associated with migration in 2016.
There was a 28% increase in migrant deaths and disappearances recorded by Missing Migrants Project in the first six months of 2016 compared with the first six months of 2015.  On Tuesday, the Briefing reported the increase was 23%.  Additionally, the first half of 2016 saw a 67% increase in recorded deaths across the Mediterranean Sea, as compared to the same period in 2015. In the original version, the increase reported was 37%.  Also, 1 in 29 people who attempted to cross the Central Mediterranean and 1 in 410 people who attempted to cross the Eastern Mediterranean died during the first six months of 2016. These numbers were first reported in the data briefing as 1 in 24 people in the Central Mediterranean and 1 in 400 people in the Eastern Mediterranean.
As described in the briefing, it is nearly impossible to know the precise number of people who die during irregular migration, and particularly at sea, where the majority of bodies are never recovered.
For the corrected version, please visit https://publications.iom.int/books/global-migration-data-analysis-centre....
Germany - As the as the number of migrant deaths worldwide continues to rise significantly, IOM’s Missing Migrants Project has recorded 28 per cent more migrant deaths during the first half of 2016 compared with the same period in 2015.
The latest IOM GMDAC Data Briefing, “Dangerous Journeys,” released on Tuesday 23 August, was prepared by the International Organization for Migration’s Global Migration Data Analysis Centre (GMDAC) in Berlin. It takes an in-depth look at the available global figures for migrant deaths and disappearances during the first half of 2016.
The data collected by Missing Migrants Project indicate that the number of people who go missing or die in the process of migration has increased significantly since 2014, especially in the Mediterranean region. The increase can partly be attributed to improving data collection.  However, it also speaks to the level of risk associated with attempting to migrate by irregular means across international borders in 2016, as well as the desperation that motivates people to take these migration journeys.
“In the first six months of 2016, more than 3,700 people went missing or lost their lives during migration around the world,” said GMDAC Director Frank Laczko. “This is a 28 per cent increase compared to the same time period in 2015, and a 52 per cent increase for the same time period in 2014.”
Dr. Laczko explained this dramatic change can be attributed to a higher number of recorded migrant fatalities in the Mediterranean Sea, North Africa, the Middle East and the Horn of Africa. “Worldwide, the Mediterranean Sea continues to greatly outweigh other regions in terms of the number of people who are recorded missing and/or dead during the process of migration,” he said. “Of the recorded deaths from January to June 2016, 78 per cent (2,901) were in the Mediterranean. This compares with 60 per cent during the same period in 2015.”
As in 2015, the majority of people who died or went missing in the Mediterranean Sea in the first six months of 2016 were lost in the Central Mediterranean. In the first half of 2016, 1 in 29 migrants died attempting the Central Mediterranean crossing, compared with 1 in 410 on the eastern route.
The high rate of death in the Central Mediterranean compared to other routes is due to two main factors:  the significantly longer overseas journey; and more dangerous smuggling strategies. Crossing from North Africa to Italy via the Central Mediterranean is a journey of several hundred kilometres, compared to the dozen or so required to travel the eastern or western routes. Additionally, boats used in the Central Mediterranean are significantly larger than those used on the eastern route.
Migration through Central America, which extends from Panama through Mexico, has led to 44 recorded deaths by various means in the first six months of 2016, and it is likely that more go uncounted. Once migrants reach the border with the United States, they must cross dangerous natural terrain, which has led to at least 161 deaths in the first half of 2016.
Poverty and the fear of detection at official border crossings have long motivated migrants to illegally hop onto freight trains, collectively referred to as “La Bestia” (the beast), as they make their way through Mexico towards the United States. Journeys are notoriously dangerous, with frequent reports of assault, maiming and death from falling off the trains.
However, since the implementation of the Mexican Programa Frontera Sur in July 2014, Missing Migrants Project data indicate that train-related deaths in this region have declined. So far in 2016, 36 per cent of the migrant deaths recorded in Central America were caused by migrants being hit by or having fallen off a train, as opposed to the same period in 2015, when 49 per cent of the recorded deaths were train-related.
Nevertheless,  because of the shift to more clandestine means of travel through Central America, such as by foot or hidden in vehicles, when death does occur during migration, there is a higher chance that migrants will not be found immediately, if at all.
The challenges involved in the collection of data and the identification of those who die during migration are also examined in the data briefing. There are significant gaps in knowledge on the location and context of migrant deaths globally, and the numbers recorded by Missing Migrants Project are considered to be vastly underestimated.  Nevertheless, even if the numbers are an informed estimate, what before was vague and ill-defined is now a quantified tragedy that must be addressed.